On 1 September, the number of guest nights spent by Hungarian tourists in Croatia exceeded 3 million, and more Hungarians visited the Adriatic state this year, compared to last year’s record – the Hungarian Tourism Directorate announced in Budapest on Monday.

Ivana Herceg said that the number of Hungarian guest nights exceeded 3 million on 1 September, while last year this figure was surpassed on 10 September.
According to previous reports, a total of about 620,000 Hungarian tourists visited Croatia last year, spending more than 3 million guest nights. (MTI) 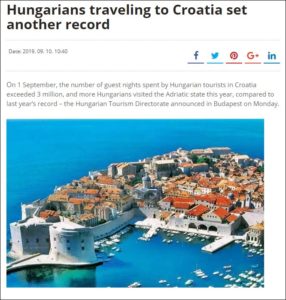 TURIZMUS Ltd. serves the daily work of the representatives of the travel trade by the production and distribution of relevant information, services and products, while on the other hand creates a communication platform for members of the travel trade and the suppliers aiming to reach them.